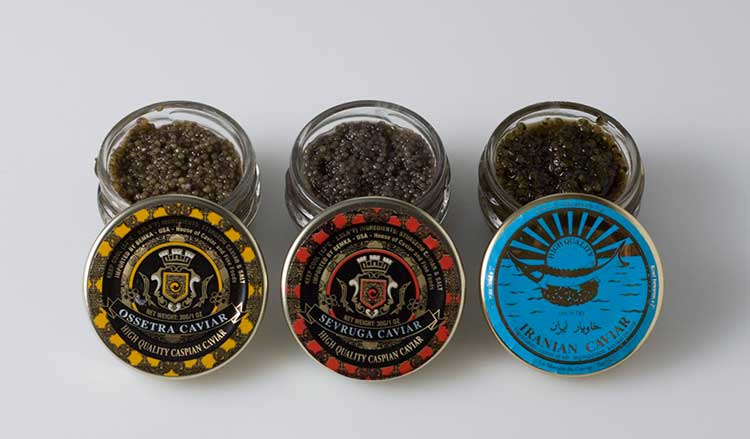 Caviar is the salted roe of fish, traditionally sturgeon, which is prized for its briny delicate flavor. Due to overfishing, politics, and pollution, the supplies have dwindled and the price has increased, leading to a flood of alternative varieties from many sources. The delicate berries of true caviar come from a variety of sturgeon, an…
Click Here To Login

Caviar is the salted roe of fish, traditionally sturgeon, which is prized for its briny delicate flavor. Due to overfishing, politics, and pollution, the supplies have dwindled and the price has increased, leading to a flood of alternative varieties from many sources. The delicate berries of true caviar come from a variety of sturgeon, an ancient fish with a life span of over a century. The female has the ability to retain her eggs for several years waiting for the perfect conditions to continue the cycle: Because the sturgeon is a bottom dweller, it has encountered difficulty traversing man’s obstacles along world rivers like the Thames, the Seine, and the Po, to name a few. Pollution in parts of the Caspian Sea has diminished the population, and longline fishing and countless ghost nets have led to a near extinction of the Beluga. Political tensions along the Caspian coastline also contributed to deregulation of both the fishing and processing industry. This is an area that has for centuries had the perfect ecosystem and habitat for sturgeon. In a very short time, irrigation and industry has left the northern Volga delta changed forever, eliminating the world’s best sturgeon spawning grounds.

Supported by a cartilaginous skeleton, sturgeons have no bones; they have not evolved since the Jurassic period. Although sturgeon easily crossbreed, Beluga, Sevruga, and Ossetra are the three varieties that are important for their caviar. In the United States and France, only the processed roe of sturgeon is allowed to be called true caviar. However, the law is hard to enforce and has been interpreted more leniently in the United States, and as long as the type of fish is identified on the label, various kinds of fish roe may be sold as caviar.

Individual caviar eggs are referred to as berries, which are graded for color, using a scale of 000 for the lightest colored caviar to 0 for the darkest. In addition to color and size, it is also graded within each variety. Beluga caviar has the largest eggs, and they are graded large or coarse. Ossetra eggs are slightly smaller than Beluga, and Sevruga are the smallest of all. Beluga eggs, from the largest of all sturgeon, comprise over a quarter of its body weight and are pale to dark grey, almost black, with a delicate outer skin and a briny flavor. It has always been sold in blue cans or glass jars with blue lids. In 2005 the U.S. Fish and Wildlife Service banned the importation of beluga caviar from the Black Sea. Over the past several decades the population of beluga sturgeon has diminished to a critical point and for the species to survive the fish and its roe must be left alone. Sevruga eggs are grayish green to black, fine grained, and have a unique and distinctive flavor. Because sevruga is the most plentiful, its caviar commands the lowest price. It is always sold in red jars or tins.

Pressed caviar is made from mature, broken, or overripe eggs. The salted eggs are put into a linen sack and pressed until all of the fatty liquid is released. The result is a marmalade-like substance that is often spread on black bread. The flavor of pressed caviar is more intense than other varieties.

OTHER VARIETIES OF “CAVIAR”

Other fish roes can be processed in the same manner as sturgeon roe and are available fresh and pasteurized. Roe from the salmon, paddlefish, crab, lumpfish, sea urchin, mullet, tuna, whitefish, flying fish, and cod each have unique sizes, textures, and flavors, and are sustainable and reasonably priced. Fresh sturgeon caviar should be plump and moist, with each individual egg shiny, smooth, separate, and intact. When you taste caviar, the eggs should release a savory flavor, faintly nutty with a hint of the sea, and they should snap in the mouth. It should be surrounded by its own thick natural oils but never appear to be swimming in it. If purchasing caviar in cans, the sides of the caviar should not fall down once the lid is removed. Caviar should always be refrigerated.