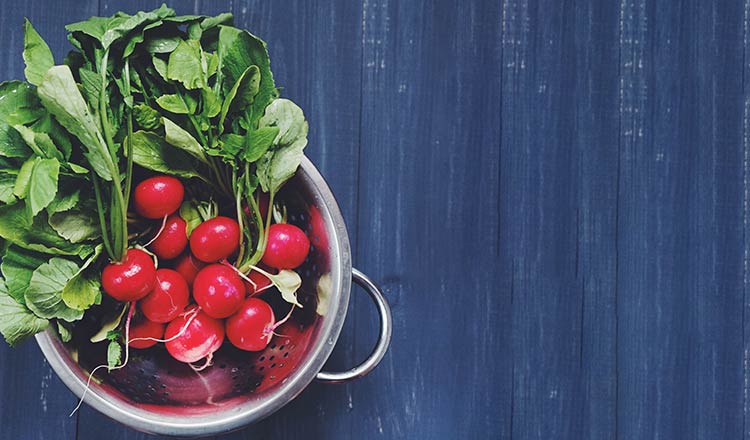 When I first moved to the United States from Germany, where I grew up and began my career, I was surprised at how little radishes are used in American cuisine. They are, to me, delicious! Not to mention inexpensive, long-lasting, and full of nutrients. Radishes are root vegetables of which there are many varieties. With…
Click Here To Login

Guide to Radishes (and What To Do With Them)

When I first moved to the United States from Germany, where I grew up and began my career, I was surprised at how little radishes are used in American cuisine. They are, to me, delicious! Not to mention inexpensive, long-lasting, and full of nutrients. Radishes are root vegetables of which there are many varieties. With firm, crunchy flesh and skin of possible colors like pink and green, radishes are often described as spicy or peppery, but I think “nosey” is a better descriptor. Like their much bolder cousins wasabi and horseradish, radishes contain glucosinolates—the mustard oil component in some foods that create that characteristic, but benign sting. The sensation of radishes of all types are felt mostly in the sinuses, so while their flavor can be mild, they have a lingering “spicy” after-effect that is felt in the nose, not the mouth. Like chiles, the strength of this nosiness is variable—even from radish to radish in the same bunch, one might be far more potent than another. 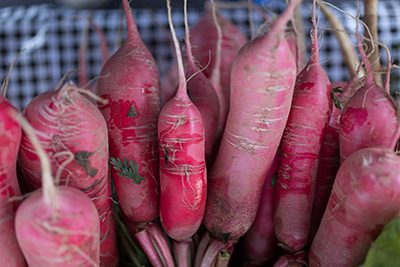 The most common radish is known in the U.S. as a red radish, but you might also see it called a globe radish. This variety is smaller than a golf ball with a white flesh and bright red skin. Breakfast radishes are typically eaten raw, shaved thinly for salads or sandwiches or commonly pickled for a flavorful condiment. You’ll frequently find radishes used this way in Latin and Southeast Asian cuisines, among others. In the city around our campus in San Antonio, it is very common to find them topping a street taco. 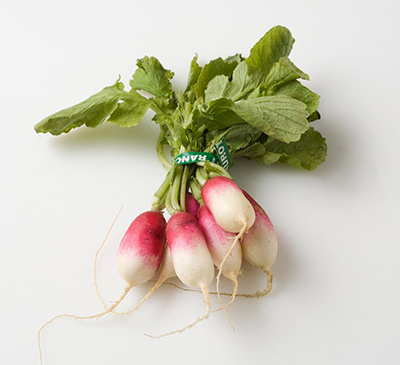 Similar to the breakfast radish are the icicle radish, Easter egg radish, and the oblong French radish, which are slightly milder in flavor. These radishes raw dipped in salted butter, is a popular treat, but I most love them marinated in a standard quick-pickling brine, with salt, sugar, vinegar, and maybe even some sesame oil and scallions. When brined, the red skin of the radishes will bleed into the picking liquid, turning the flesh of the radishes pink. Though you can pickle radishes whole, if you like, the smaller they are, the quicker they will absorb the brine liquid, so I prefer thinly slied on a mandoline or cut into wedges, depending on how I will use them.

You’ve likely seen dishes at a restaurant or in food magazines that is garnished with brightly colored and sometimes geometrically patterned vegetables—and those are probably radishes! While there are tons of heirloom varieties with bright flesh and starburst patterns, the most common and easy-to-find is the watermelon radish. With a light green and white skin giving way to bright pink flesh, watermelon radishes are mellow in flavor and mostly used for their dynamic appearance. These radishes will lose some of their vibrance if pickled or cooked, so I like to take advantage of their beauty by serving them raw, simply sprinkled with salt. The Korean green radish, for instance, which is bright green on the interior, is commonly served paper thin on a plate as a side dish, like a carpaccio.

Daikon radishes are much larger than other common varieties, and are most often used in Asian cuisines. It can grow very large—up to a foot or even more, but the smaller ones tend to be less fibrous and more enjoyable. Very small versions are grated in Japan and used like wasabi, but the larger variety are generally julienned for salads or garnish, or marinated for use like kimchi. In Germany, a spiralized white radish, similar to the daikon, is served raw with just a sprinkling of salt, sugar, and pepper. It’s a popular snack! Though not so much my personal preferences, radishes can be cooked, which brings out the sweetness and softens the crunchy interior to a tender finish. I can imagine a plant-forward main course of a barbecued or deeply roasted daikon radish, sliced and served with tortillas or steamed Asian-style buns and plenty of accompaniments.

Hinnerk von Bargen is a professor at The Culinary Institute of America in San Antonio, Texas.