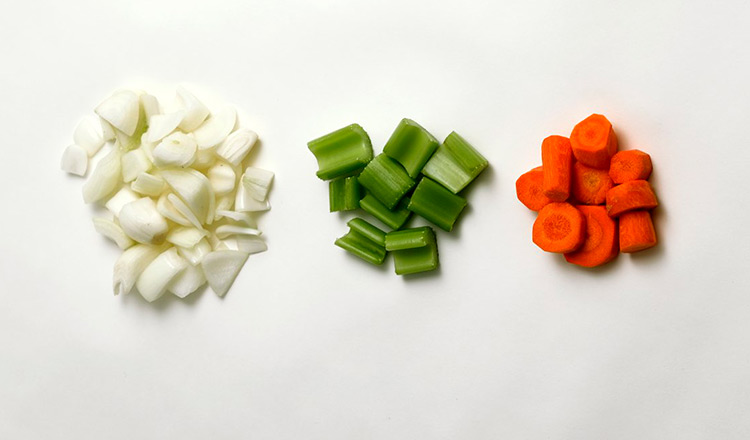 Onions, carrots, celery, leeks, parsnips, garlic, tomatoes, shallots, mushrooms, peppers, and ginger are among the ingredients commonly referred to as aromatics. They may be used in various combinations, as dictated by the cuisine and the dish itself. Even when used in relatively small amounts, aromatic ingredients make a significant contribution to a dish. The most…
Click Here To Login

Recipes Between the Lines: Mirepoix

Onions, carrots, celery, leeks, parsnips, garlic, tomatoes, shallots, mushrooms, peppers, and ginger are among the ingredients commonly referred to as aromatics. They may be used in various combinations, as dictated by the cuisine and the dish itself. Even when used in relatively small amounts, aromatic ingredients make a significant contribution to a dish. The most commonly used aromatics in western cuisine are onion, carrot, and celery. This combination is known as mirepoix, and it is the base for most stocks, soups, sauces, stews, and braises. Mirepoix is typically used in a 2:1:1 ratio, or 2 parts onion, 1 part carrot, and 1 part celery. That means 1 lb of mirepoix would call for 8 oz onion, 4 oz carrot, and 4 oz celery. About 1 lb of mirepoix is enough to flavor 1 gallon of soup, for example. To get the best flavor from mirepoix and similar preparations, thoroughly rinse and trim all the vegetables first. Onion skin will give a simmering liquid an orange or yellow tint, which may not be desirable, so determine whether to peel onions. Scrubbing, but not peeling, carrots and parsnips can cut down on the prep time. Nevertheless, some chefs peel all vegetables on the premise that flavor is extracted into the dish more easily; others peel them only when they are not strained out of the finished dish. Whether or not the vegetables are peeled, cut them into pieces of a relatively uniform size, with the dimensions matched to the cooking time of the dish. The shorter the simmering time, the smaller and thinner the cut; the longer the time, the larger and thicker the cut. Make larger cuts for long-simmering dishes such as pot roasts or brown veal stock. Cut mirepoix small or slice it for use in uncooked marinades, pan gravies, and dishes that simmer up to three hours. Slice mirepoix very fine for light stocks that simmer less than one hour. Mirepoix will add a distinct aroma to a dish, even if the cut-up vegetables are simply added to the pot as it simmers. Sweating, smothering, roasting, or browning them in fat significantly changes their flavor. As a general rule, browning means more richness and savory-sweetness. Start by cooking onions in just enough fat to coat the bottom of the pan and vegetables, then add the carrots, and finally the celery. White stocks or cream soups generally call for cooking the mirepoix over low heat in fat until it starts to give off some of its own natural moisture, known as sweating. If the pot is covered as the aromatics sweat, the technique is smothering. In classic French cooking, a white mirepoix would be used in light colored stocks, sauces, and other dishes, to keep the colors of other vegetables from leaching into the finished dish. White mirepoix is made up of equal parts onion, celery (or celeriac), parsnip, and leek. Another common mirepoix-like mix is the Cajun Trinity: 2 parts onion to 1 part celery and 1 part bell pepper, used as a base for Cajun dishes like jambalaya.

Copyright © 2023 The Culinary Institute of America