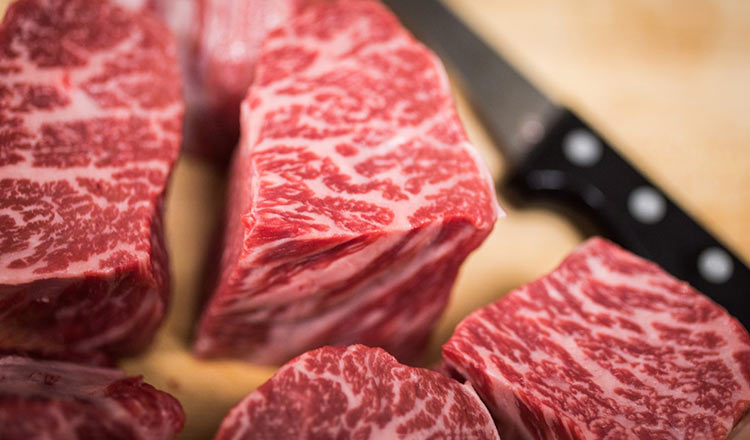 If may sound a little basic, but today’s lesson is about seasoning meat before you cook it. Revolutionary, right? Sure, of course, we all know how important adequately seasoning food with salt is. Salt, in all of its varieties, primes our taste buds to enjoy food. But salt also primes the food to…be enjoyable! Salt…
Click Here To Login

If may sound a little basic, but today’s lesson is about seasoning meat before you cook it. Revolutionary, right? Sure, of course, we all know how important adequately seasoning food with salt is. Salt, in all of its varieties, primes our taste buds to enjoy food. But salt also primes the food to…be enjoyable! Salt is hygroscopic, meaning it attracts water—and we use that to our advantage as often as possible in the kitchen. By salting ingredients, like fruits, vegetables, and meat, we can draw water out of the food. For some ingredients, this is the main goal. We salt cucumbers in a colander, letting the water drain away before we mix the cucumbers into a tzatziki sauce. By doing this, we prevent all that extra water from diluting the sauce. When you think of it that way, salting meat, poultry, and fish may seem counterintuitive. After all, we want our meat to be moist and juicy, why would be remove moisture? Unlike the cucumbers, when we pre-season meat, we are manipulating the ingredient’s natural moisture, rather than removing it. If you salt a chicken breast, for example, and let it rest in the refrigerator, the water will be drawn to the surface of the chicken. There, it will mingle with the salt at the surface of the meat before slowly reabsorbing back into the muscle (thanks, osmosis!). You are essentially creating a concentrated brine on the surface of the chicken. But unlike a traditional brine, you’re not adding extra water to dilute the flavor of your meat, instead using the water that already exists within the ingredient. Also, unlike a traditional brine, you don’t have to put a bucket of salty water in your refrigerator—and that is a big bonus. Ideally, you would pre-salt your meat and refrigerate it on a rack fitted into a baking sheet. This allows air to circulate around the item, leaving you with a dry surface ready to cook. Salting your meat and putting it in a zip-top bag or even wrapped up back in the paper from the butcher is still worthwhile—just be sure to pat the meat dry before cooking it or you risk steaming your food rather than sautéing, grilling, or roasting. For small cuts of meat, like steaks, chops, or chicken breast and thighs, you’ll need at least an hour for the salt to work its magic. For large cuts and roasts, resting the meat for about 24 hours will ensure enough time to make a difference. Now that you know the technique, give pre-salting a try with a few of our favorite recipes: Roasted Pork Tenderloin with Honey-Mustard Sauce Lemon-Ginger Grilled Chicken Roast Duck with Orange Sauce Lamb Chops with Fava Beans Spit-Roasted Garlic and Lime Chicken Roasted Turkey with Maple and Walnut Glaze

Copyright © 2023 The Culinary Institute of America