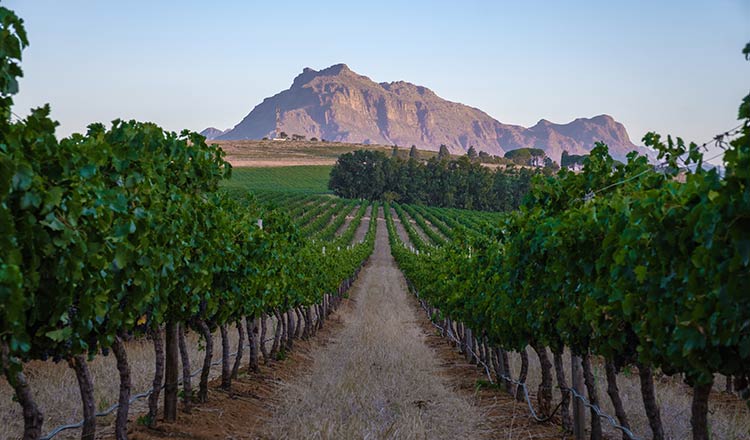 South Africa is a land of contrasts, especially within the hundred miles from the east, south, and west coastlines that define this wine land. It is situated at a crossroads of climatic and cultural influences that have helped to define South African history and its wines. Climatically, both the Atlantic and Indian oceans impact the…
Click Here To Login

South Africa is a land of contrasts, especially within the hundred miles from the east, south, and west coastlines that define this wine land. It is situated at a crossroads of climatic and cultural influences that have helped to define South African history and its wines. Climatically, both the Atlantic and Indian oceans impact the region, bringing dry or moist, hot or cold air, depending on the season and the prevailing winds. It is easy to make the assumption that South Africa’s location at the southern tip of the continental mass of Africa makes it a cool grape-growing area. But the general picture is a warmer climate. Cape Town itself sits at 34 degrees latitude, which is only just within the accepted northerly limit of grape growing in the Southern Hemisphere. However, the varied landscape also provides for contrasts in climate, with pockets of cool, even cold grape-growing areas provided by elevation, proximity to the ocean, or shelter from warm winds. That wide variety of climatic conditions allows South Africa to make a broad range of wine styles, from cool-climate Sauvignon Blanc to warmer Rhone styles such as Syrah and Grenache.

In addition to the usual gathering of international grape types, South Africa has two unusual claims to fame—Chenin Blanc and Pinotage. Chenin Blanc is South Africa’s most widely planted grape type, a claim that can be made by no other wine nation in the world. Historically, the grape was used in South Africa for the production of inexpensive fortified Port- and Sherry-style wines destined for the British market, both in the British Isles and their colonies. With the decline in that market and restrictions on using the terms “Port” and “Sherry” on South African wine labels, the growers of this grape have had to find another outlet. Given that the broad plantings of this variety often ended up on flat, fertile lands, making undistinguished wine, it has been difficult to generate much interest in the variety. But relatively inexpensive South African Chenin Blanc produced in a dry style can be a fascinating wine and is extremely food-friendly. Its flavors of melon, pear, and hazelnut and its naturally high acidity make it a very useful wine to have on hand. Try it with lobster or smoked trout and you will wonder why more places around the world do not make this wine. Watch for the word “Steen” on some labels: it is a South African synonym for Chenin Blanc. Pinotage is South Africa’s own wine grape. It was created by a South African settler by crossing Pinot Noir with the southern French variety called Cinsaut. You may immediately recognize that Pinot Noir is a cool-climate grape type. Cinsaut, on the other hand, is a warm-climate variety. What the intrepid settler seems to have attempted was the creation of a grape type suited to South Africa’s climate and growing conditions. Certainly, no other place in the world has adopted this unusual variety as a mainstay of its wine industry, and that should tell you something. Even today, with a revitalization of the South African wine industry well under way, Pinotage wines themselves remain something of a mystery and a glassful of contrast, capable of greatness but sometimes disappointment. In addition to those two unusual characters, the usual range of international grapes is found in South Africa. Chardonnay is made in an attractive cool-climate style when the right growing conditions can be found, producing a crisp wine with just a hint of oak and flavors of apple and citrus. Occasionally a producer will also go toward a fuller, more tropical style. Sauvignon Blanc has earned a good reputation here thanks to its treatment at the hands of the right growers and winemakers. With an overall warm climate, it is not hard to find sites that will produce Sauvignon Blanc grapes with ripe citrus flavors, but the truly exceptional wines come from areas where there are cool influences that lengthen the growing season and keep acidity levels high. The result is not only a bright lime and gooseberry character, but also an element of green leaf or nettle. Try a glass with blanched asparagus and a drizzle of butter— your day will look brighter. Cabernet Sauvignon has long claimed its rightful place in South Africa as a grape capable of producing some superb wines, and Merlot has been adopted both as a blender with Cabernet and as a single-varietal wine in its own right. The style of these red wines tends to be warmly ripe, but with attenuating acidity and tannins that seem to make the wines more complete.  Cabernet Franc is also frequently used in blends with Cabernet Sauvignon and Merlot. Many producers of South African wine have won great acclaim for their Syrah/Shiraz and Grenache wines, and with good reason. These grapes and their wines are ideally suited to the general growing conditions in South Africa, and they seem to easily reach full ripeness, which translates into warm, dark fruit flavors with a touch of spice in the glass—a wonderful accompaniment to lamb stew on a cool autumnal evening.