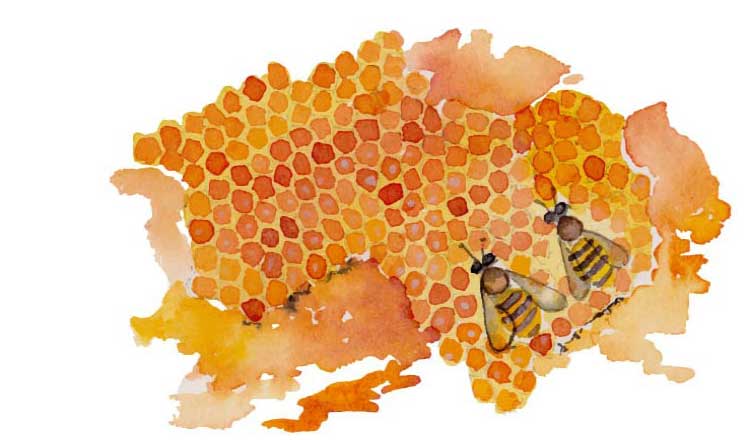 Honey is an ingredient we’re all familiar with: most likely, there is a jar or squeezable bear in your cupboard right now. It’s something we love to use to sweeten tea, drizzle on berries, and include in many of our favorite dishes and desserts. But how much have you actually thought about where this beautiful, sweet, golden concoction really comes from?

Let’s take a look at how fascinating and efficient honeybees are, along with the plight they have faced in recent years and how their sweet and sticky byproduct has made its impact on history. You may never look at these creatures—or that jar of honey—the same way again.

Honeybees are social insects that live together in large communities called hives. They have a strict system of roles and responsibilities, with the bees divided into three classes: workers, drones, and queen.

Worker bees (the developed female bees) do all the work we can see without getting really invasive in the hive. They are the pollen and nectar collectors, the honeycomb builders, and the ones responsible for protecting and attending to the queen. The drones (male bees), have a single focus: to mate with the queen. The queen’s only job is to lay eggs. When winter comes, the drone bees are expelled from the hive to preserve the colony’s energy, as the queen and workers survive off of the honey produced in the warmer months.

To create the honey, honeybees work around the clock. They begin by collecting nectar and bringing it back to the hive. It then gets passed from bee to bee to partially digest it using naturally produced enzymes. The nectar is then deposited into wax honeycombs and left to dehydrate and thicken. The thickening process is performed by the worker bees, who fan their wings at the rate of more than 200 flaps per second, reducing the moisture content of the nectar from as high as 80% to as low as 13%. Once the nectar has reduced, the honeycomb cell is capped with a thin layer of wax for storage and the process continues.

When a worker bee finds a location rich in nectar, she returns to the hive to inform the others. She will land in the hive and do a sort of dance, moving her body to indicate where the others can fly to find the payout. It is very precise and can communicate an exact location just by flapping her wings and wagging her body while facing a particular direction within the hive. This tells the others not only the direction, but also the distance they need to travel.

Honeybees have been doing all this heavy lifting for a long, long time, because honey has been important and even revered by people throughout history. Rich in flavors way beyond granulated sugar, honey also boasts a long history of medicinal uses, including the holistic treatment of everything from allergies to wound care due to its antibacterial properties as well as antioxidants, vitamins, and minerals. In many cultures, honey has been part of ancient religious and ceremonial rituals and traditions. Pots of honey (still edible!) have even been excavated from an ancient tomb in one of Egypt’s pyramids dating back approximately 3,000 years.

From just these few examples, you can see how impactful honey is. And now knowing that, day in and day out, bees are hard at work creating this beautiful sweetener and pollinating all the foods we could dream of adding it to, you can see why honey and the honeybee have been appreciated for so long.

Hopefully, the next time you drizzle away, you will remember the magic—and not so much the stinger—of the honeybee.

Chef Sandy Sauter, manager of culinary demonstrations for California, oversees the culinary aspects of all classes for enthusiasts at the CIA’s two Napa Valley locations.