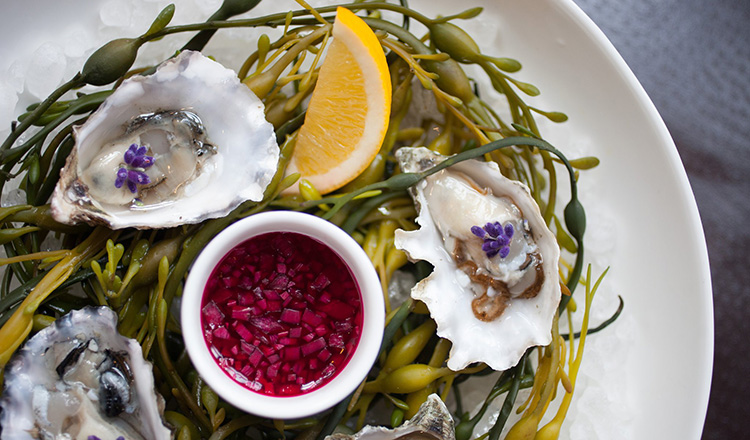 Across much of the world, oysters are an iconic New Year food tradition, but especially in France, where pop-up oyster stalls emerge throughout Paris to supply the city with this holiday staple. 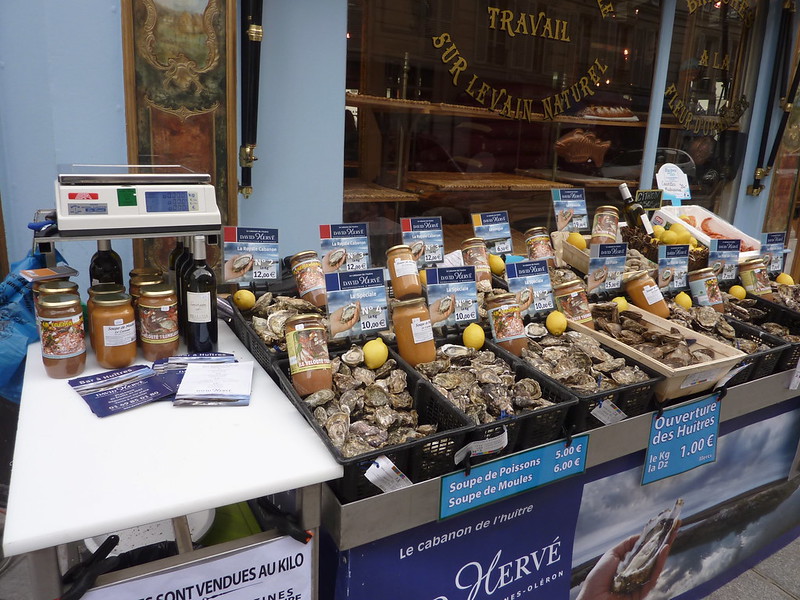 Few foods are as polarizing as oysters. Diners either passionately endorse the intake of these bivalves or are repulsed by them. Whether people compare eating oysters to either “kissing the ocean on the lips” or “eating salty boogers,” you’ll rarely hear someone say that they “can take ’em or leave ’em.”

Edible oysters all belong to the family Ostreidae, and there are only a few different species that are commonly sold in the United States: Crassostrea virginica (including the Eastern oyster) and Ostrea lurida (including the Olympia oyster). The famous Bélon oyster is Ostrea angasi, and is also known as the European flat oyster. It may surprise some of you that all edible oysters fall into just two genera, especially if you’ve been to a raw bar where they had twenty different kinds of oysters available.

The trick is that, somewhat like wine grapes, oysters are sensitive to their growing conditions. Different foods, temperatures, and even the shape of the estuary floor can drastically affect the shape, flavor, and texture of the oysters. This is why (as in wine) many oysters are named for their place of origin, like Nantuckets, Chincoteagues, and Fanny Bays—all of which are the same species.

The different species do, indeed, have some basic differences that might help you to pick a favorite. Bélons are wide, flat, and meaty, and great to cook with. Olympias and other West Coast oysters can often have a scent of watermelon rind and are rather soft in texture. We think East Coast oysters provide a good balance of texture and flavor, either raw or cooked. Try them all to see which you like best.

Once you’ve chosen which oysters you are going to serve, you need a stiff scrub brush, an oyster knife, and either a kitchen towel or a shucking glove. Scrub the oysters under running water to clean off mud and debris.

Then, either hold the oyster in the middle of a folded towel on a cutting board or in your hand with the shucking glove. Make sure the flat shell is on top, the cupped shell on the bottom. Insert the oyster knife in the hinge (pointy part) of the shell. Wiggle the knife around, pull it out and wipe off the muck, then put the knife back in. When the knife feels like it is firmly in place, twist the knife to break open the hinge (this requires more technique than brawn.) Keep the knife parallel to and against the top shelf and sweep the blade forward to sever the abductor muscle from the top shell.

Now, if you’re French, you serve the oyster like this, with the bottom of the muscle still attached. If you prefer to slurp the oyster out of the shell, the muscle needs to be severed. To do this, turn the curved side of the knife down, and then gently turn over the oysters to present the rounded side on top. The oyster will appear plumper. 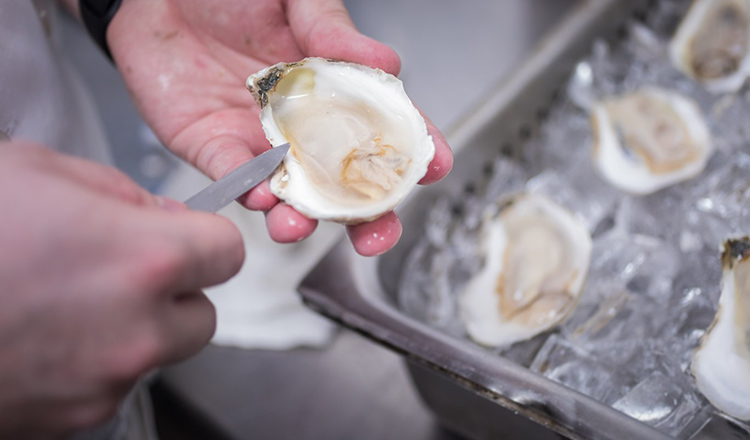 Whichever way you shuck the oyster, be careful not to lose any of the “liquor” that’s in the shell—it tastes good. If the oysters are pristine, all they really need is a squeeze of lemon juice, and maybe a grind of black pepper. While folks like mignonette (a vinegar-and-cracked pepper sauce), hot sauce, or cocktail sauces, we say avoid the sweet, thick cocktail sauce because it obscures the flavor of the oyster.

Wondering what to drink with your oysters? Try Muscadet Sur Lie, Sèvre-et-Maine or lager beer. Perhaps the driest and simplest of all white wines, Muscadet stands in for the lemon that many a Breton would squeeze onto their oysters and shellfish. A crisp, dry lager beer will do just fine as an alternative to wine. If it’s just oysters you’re serving, Guinness Stout is a surprisingly perfect partner.

When researching for their book, Bistros and Brasseries (Lebhar-Friedman, 2008), John Fischer and Lou Jones celebrated New Year’s Eve in France and shared their oyster-rich experience:

When we were on our Tour de France Gastronomique, New Year’s Eve was celebrated at the home of Chef Xavier LeRoux’s brother. This being in Brittany, the meal began with a mind-boggling array of chilled shellfish served on ice. The serving vessels (literally) were miniature Styrofoam rowboats with Blavez Mad (Breton Gaelic for “Happy New Year”) emblazoned across their bows.

The meal was amazing, with the duck main course being served at 2 o’clock in the morning. Obviously, New Year’s Day began a bit late for us, as we headed back towards Paris. We stopped to look at the Port de Bélon along the river of the same name. We hadn’t seen Lou for a few minutes, until I spotted him through the viewfinder of the video camera I was using to document our trip. He was sipping Champagne and eating oysters with some locals who were picnicking from their car! He motioned us over, where we joined in the largesse of our mobile hosts. Under blue skies, bracing New Year’s Day winds, enjoying good Champagne and Bélon oysters at the Bélon River was a good way to start the year.