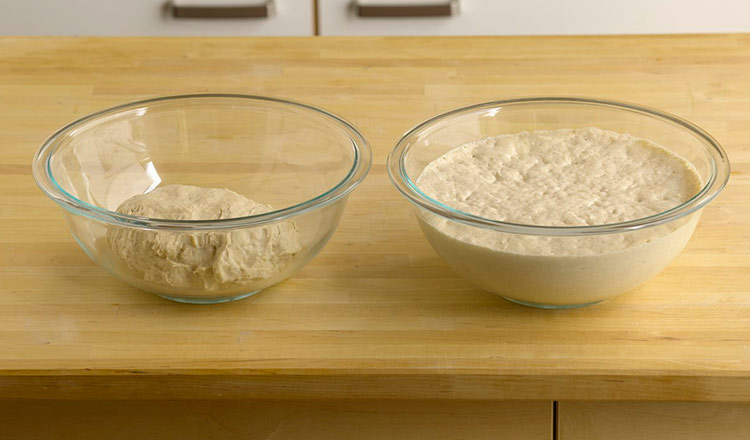 The process of making sourdough bread begins with creation of a sour, a culture of microorganisms that are fed and cultivated to increase their quantity. This sour is then used to ferment the final bread dough. To fully understand the process of sourdough baking, it is important to examine each stage, step by step. Note:…
Click Here To Login

The process of making sourdough bread begins with creation of a sour, a culture of microorganisms that are fed and cultivated to increase their quantity. This sour is then used to ferment the final bread dough. To fully understand the process of sourdough baking, it is important to examine each stage, step by step. Note: A sourdough is commonly referred to as a levain. This is simply the French term for the preferment, and the terms can be used interchangeably. There are two primary microorganisms that help create the sourdough culture: yeast and bacteria. Both need different things to thrive and therefore are affected differently by every factor in the process, including hydration levels, other ingredients, temperatures, and acidity. The yeasts present in a sour culture are classified as “wild yeast” because they are naturally present in the environment. The most predominant yeast in sour cultures is Saccharomyces cerevisiae. This yeast consumes the simple sugars (glucose and fructose), producing alcohol (ethanol) and gas (carbon dioxide) as the dough begins to ferment. Just as with commercial yeast, the gas contributes to the development of the dough, and the alcohol contributes flavors and aromas. The bacteria are lactic bacteria (Lactobacillus and/or Lactococcus). These bacteria convert sugars into organic acids, which produce additional flavors and aromas in the bread. Again, the results are similar to those produced with commercial yeast. These microorganisms are everywhere, but they are specifically prominent in the flour being used to create the sour starter. One gram of flour contains roughly 13,000 wild yeast cells and 320 lactic bacteria cells. It is ideal to use organic flours, which produce the best sour development.

The sourdough process can be understood as six steps:

There are many ways to start a sourdough culture, but the concept is always the same. The initial microorganisms are present in the flour, but to develop them they need to be activated enough to begin to ferment the dough. This happens when the microorganisms are fed, causing them to reproduce and begin to produce alcohol, gas, and acidity. This food comes from additions of flour, water, and oxygen. Some formulas call for the addition of simple sugars in the form of malt or honey, which also provide immediate food and nutrients for the microorganisms. Using organic flour can increase the chances of creating a successful starter. Because no chemicals or pesticides are used on the wheat ground into the flour, organic flours contain higher levels of the naturally present microorganisms. Rye flour is also richer in these microorganisms along with a variety of minerals. The minerals can serve as additional food for the yeast and bacteria.

Culture elaboration is the process that occurs from the creation of the culture until it is used as a starter. When the ingredients are mixed, the hydration of the flour and the incorporation of oxygen start the activity of the microorganisms. Initially, sufficient oxygen introduction creates the ideal conditions for reproduction of the microorganisms. After a few hours, the increase in microorganisms begins to reduce the amount of available oxygen, eventually creating an anaerobic environment. At this point, fermentation begins, enhanced by consistently warm temperatures. After about 22 hours, the culture will have doubled in volume. During elaboration, there’s a balance of yeast and bacteria, in both quantity and quality. Some of the microorganisms are more or less resistant to the lack of food, lack of oxygen, or acidification of the culture. Cohabitation of the yeast and bacteria is also possible because they are not competing for the same nutrients. But to ensure that the yeast and bacteria can continue to reproduce and begin fermentation, the vital conditions (food, water, and oxygen) of the culture need to be renewed. This happens through the course of feeding the starter, which is several times during elaboration. While a schedule is to be followed, a baker can tell that a culture needs a feeding when it begins to collapse in the center. A well‐established culture should rise four times in volume during the 6 to 8 hours of fermentation. When this volume is reached, the culture has become a starter. It is important to remember that even though the primary type of yeast and bacteria are the same, each culture will be different and will produce different products.

Sour cultures need regular feedings for the first five days to become useable sour starters. During this process, the culture should be held at 80°F/27°C to encourage proper fermentation. After five to seven days of feeding, the starter may be changed into a sour. A good indicator of this is when the starter changes from a dome shape to a more concave shape.

The schedule for the starter can be adjusted to meet the needs of your kitchen. Follow our schedule to create a fully developed starter that can be used after five days. At that point, the sourdough starter can be refrigerated to slow its fermentation and space out the feeding schedule. The starter can also be dried out with flour and frozen to preserve it for further use. Several factors can affect the activity of the culture during the feeding process. This, in turn, affects the characteristics of the finished loaf.

To maintain a pure, consistent culture, bakers should take care to properly sanitize all work areas and equipment prior to feeding the starter. The starter should not be contaminated with scraps of other dough, especially dough being made with commercial yeast. The feeding process should remain consistent—maintaining the proper proportion of ingredients, the precise feeding schedule, correct temperatures, and exact fermentation times.