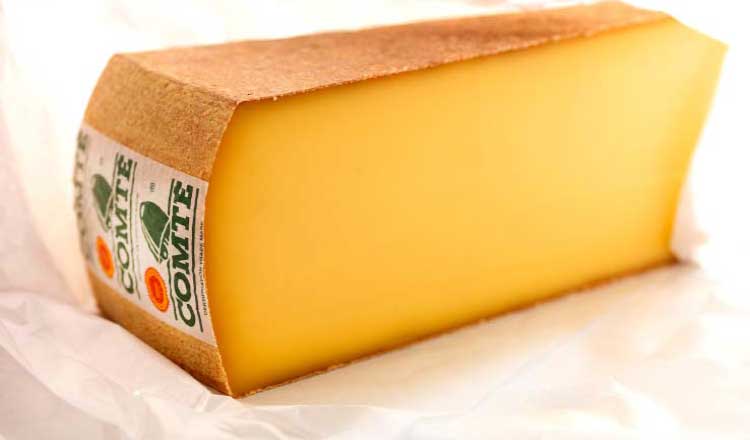 I claim it: Comté has been one of my favorite cheeses since I first tasted it decades ago. I cherish its flavors, texture, and complexity, and I purchase it regularly and savor it often.

But until recently, I never appreciated the full story behind Comté cheese making. Sure, I knew the basics—raw milk from a specific breed of cows raised in the alpine pastures of the Jura, aged up to two years depending on the desired style. On a recent trip to eastern France, I learned the compelling story that results in this spectacular, one-of-a-kind cheese.

Comté is a PDO (Protected Designation of Origin) cheese, officially recognized as such by the French government in 1958. But its story begins hundreds, perhaps thousands, of years earlier. Cheese has long been a source of preserving milk and providing humans with nourishment. But the qualities of Comté have been refined over the centuries, and today the complex network of participants in its production all contribute to this sublime artisanal cheese.

There are three equally important participants: farms, creameries, and aging facilities. In the Jura, these are known as the fermes, fruitières, and caves d’affineurs, respectively. As one member of the cooperative put it to me, “No farms, no cheesemakers; no affineurs, no Comté.”

Interestingly for me, whose background is in wine, the notion of a cooperative model is not always associated with quality. With a few notable exceptions, cooperative wineries tend to produce mediocre, unmemorable wines. In the cheese world, as in wine, we tend to associate quality with small production—we can be led to believe that “farmstead” cheese or “estate bottled” wines are superior. This is simply not always or even often true. I am hard-pressed to think of a better example of the cooperative model of any culinary product than that of Comté. And yet Comté is a product of terroir—expressed through the flavors and textures of cheese, it represents a place.

That place is the Jura. Nestled below the foothills of the Alps, this bucolic area is ideal for cattle grazing. And as cattle go, the Montbéliarde is a magnificent breed: sturdy, productive, and beautiful. There are roughly 2,600 cattle farms in the Jura that raise these cows for their fine milk, with most of the herds numbering fewer than 60 cows. In the regulations of the Comté PDO, the farms are required to have at least two and a half acres per cow to roam; most have much more. In the summertime, when the cows graze in the meadows of natural grasses and wildflowers, it’s really something to see and hear when they come in for milking. The farmer simply calls for them and as the herding dogs do their work, the cows come in, their bells a symphony.

The milk is delivered to the fruitières daily, where the cheesemakers work long hours in humid conditions to craft impressive wheels of young Comté. There are 160 fruitières in the cooperative, each of which may work with up to 20 farms. Another requirement of the PDO is that the farms that provide the milk are within 15 miles.

The last step of the process is the aging facilities. There are 16 of them and their job is to age the wheels to desired styles. All Comté must be aged a minimum of 120 days, but most is aged longer. Preferred ages, in my observation, are at six, eight, 12, 18, and 24 months, although I did taste a rare 30-month Comté. A wheel of Comté weighs roughly 100 pounds. The affineurs seem to effortlessly know every wheel in their cellar. Their job is literally to “listen to the cheese,” which they do by making rounds and tapping on the wheels with a tiny wooden hammer-like tool called a sonde. By touch and sound they ascertain the quality of the wheel. With the same tool, they hollow out a small piece to smell and taste; only then do they decide if the wheel is ready.

Every wheel of Comté is different. The variables are myriad: did the cows eat summer botanicals or winter hay? How long was the cheese aged? How is it served?

It all amounts simply to tasting and exploring much Comté. The youthful cheeses have a fresh grassy characteristic with an underlying creaminess, while the older ones have a nutty and caramelized flavor; often they possess mini crunchy granules called tyrosines (amino acids) that add a textural element. Comté served with a local Jura wine made from Savagnin grapes is my own preferred tasting.

However you decide to savor Comté, the experience is enhanced when you consider the incredible cooperative system that produces this magnificent cheese.

Christie Dufault is an associate professor of wine and beverage studies at the CIA’s California campus. She holds a CIA Advanced Certified Wine Professional credential and was named “Best Wine Director” by San Francisco magazine.