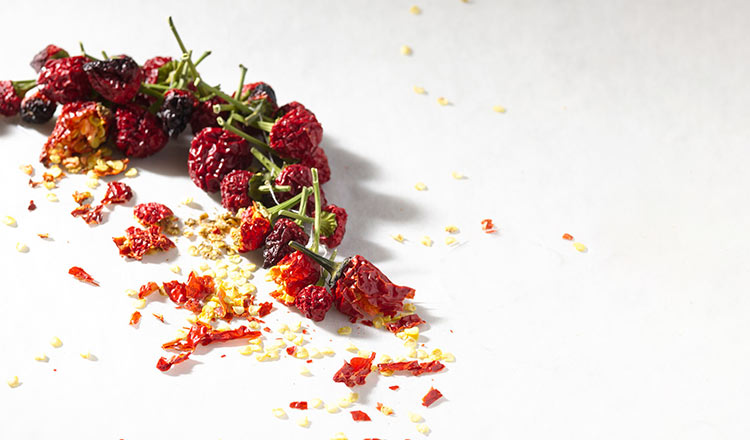 Chiles are actually a fruit that belong to the genus Capsicum. Most of the chiles found in Mexico belong to the Capsicum annuum species, save for the chile manzano (C. pubescens), and the chile habanero (C. chinense). Based on archeological remains we know that chiles were being consumed over seven thousand years ago in Oaxaca’s…
Click Here To Login

Chiles: The World’s Most Versatile Fruit

Chiles are actually a fruit that belong to the genus Capsicum. Most of the chiles found in Mexico belong to the Capsicum annuum species, save for the chile manzano (C. pubescens), and the chile habanero (C. chinense). Based on archeological remains we know that chiles were being consumed over seven thousand years ago in Oaxaca’s Guila Naquitz cave. For millennia, chiles have provided a valuable source of vitamin A and C in the daily Mexican diet. Upon arriving in the New World, the Spanish conquerors and priests observed the important role that chiles played in pre-Columbian society – as a tribute, medicinal remedy, weapon, and versatile condiment. Early explorers and ethnographers like Alexander von Humbolt and Fray Bartolomé de las Casas noted and compared the use of chile in Mexico to the use of salt in Europe, i.e. used to season everything. When speaking about chiles in Mexico it is important to talk about terroir. Chiles are as much a part of their environment as they are of the cuisine. Whether dealing with a dry and arid climate or one that is hot and humid, all of these factors have an impact on the particular flavor profile of a chile. There are many microclimates throughout Mexico that produce unique and rare chiles. On this point, Oaxaca serves as an example as it is home to more chile microclimates than anywhere else in the world. The chile chilhuacle, chile chilcostle, and the chile pasilla Oaxaqueño, for example, are not grown outside their native Oaxaca and are essential ingredients for some of the state’s well-known moles. Other chiles, like the chile manzano, can only be grown at higher elevations in tropical weather. Chiles play an essential role in almost every ethnic cuisine on the planet, not just Mexico’s. In addition to savory and traditional applications, chiles have prominently made their way onto the pastry scene in recent years with great popularity and success. Culinary professionals should possess a basic understanding of chile varieties, preparation techniques, and understand how to apply these techniques in both ethnic and regional US cuisines.

Tips for Cooking with Chiles

Most cooks who are working with large batches of chiles should wear impermeable gloves to prevent the sting of capsaicin, an oil from the chile producing a stinging sensation in the mouth, eyes, skin, or affected area. Use a sliced tomato to combat the affected area and press firmly until the stinging subsides. Miraculously, the acidity of the tomato seems to combat the stinging qualities of the capsaicin oil. Some people also recommend washing hands in a solution of bleach and water to remove the oil from the hands. The oils produced by capsicum fruits facilitate the production of saliva in the mouth and make a person thirsty when eating hot or spicy foods. However, when your eyes and nose begin to water incessantly from eating too much chile you have become “enchilado.” Most Mexicans use salt to combat a good chile heat. Contrary to US practices, Mexicans do not use dairy-based foods to combat the heat of a chile. Looking for more? Check out our glossary of Mexican chiles.