Pull up a chair for an up-close and personal experience as our CIA Chefs cook at home and invite you into their kitchens.

Every week starting October 18, tune in online for live cooking demonstrations with our CIA family, featuring Chefs Maneet Chauhan ’00, Johnny Hernandez ’89, J.J. Johnson ’07, and Katianna Hong ’05. You won’t want to miss out on this special chance to cook along and connect directly with these chefs and learn their secrets for creating both delicious dishes and a sense of community. 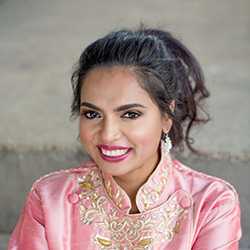 Chef Maneet Chauhan has worked in some of the finest hotels in her native India before the start of her career in the United States, which includes winning the 2012 James Beard Foundation Broadcast Media Award for her role as a permanent judge on Chopped and becoming an award-winning cookbook author. Now, as founding partner of Morph Hospitality Group, Chef Chauhan oversees all of Morph’s concepts—Chauhan Ale & Masala House, Tànsuǒ, The Mockingbird, and Chaatable—and is also the founder of Hop Springs Brewery in Mufreesboro, TN. 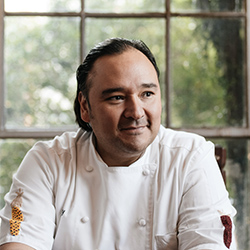 Chef Johnny Hernandez is one of the premier Mexican cuisine chefs in the United States and a recognized authority on Mexican cuisine and culture. Since becoming a rising star in the culinary scene in 2010, his ventures have expanded into Grupo La Gloria, a diverse and growing portfolio of signature restaurants and culinary projects. He has been featured in numerous publications and TV shows, but one of his highest accolades came in 2016, when he showcased his culinary expertise and the flavors of Mexico at the White House as Guest Chef for President of the United States, Barack Obama.

Chef Johnny will be preparing a seasonal Mexican tlacoyo, a fresh-pressed oval-shaped corn tortilla, topped with seared scallops and an herb mole. 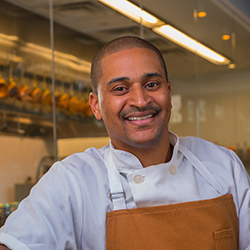 Chef J.J. Johnson is a James Beard Award-winning chef best known for his barrier-breaking cuisine connecting the foodways of West Africa and Asia to the Americas. He is a Chef on Buzzfeed’s Tasty platform, a Mastercard Ambassador, the television host on Just Eats with Chef JJ, and an award-winning cookbook author featured in Forbes “30 Under 30” and as an Eater Young Gun. With his hospitality group, Chef Johnson opened FIELDTRIP, a quick-casual rice bowl shop located in Harlem, NY that highlights rice traditions from around the world.

Chef J.J. will be preparing spicy prawns in a piri piri sauce—a hot, flavorful sauce that be used many different ways. 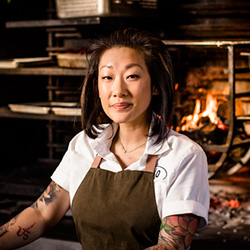 Chef Katianna Hong has worked her way up in some of the best kitchens throughout the country, including being former Chef at The Charter Oak and former Chef de Cuisine at The Restaurant at Meadowood in Napa. During her time at The Restaurant at Meadowood, she was the only female Chef de Cuisine in a U.S. Michelin three-starred restaurant. She has been honored as San Francisco Magazine’s “Rising Star Chef” and one of Food and Wine Magazine’s “Best New Chefs.”

Chef John Hong realized he belonged in the kitchen after a short stint in college. After graduating culinary school in Chicago and working at three Michelin-starred Alinea, he made the decision to move west. When he landed in the Napa Valley, he worked his way up at The Restaurant at Meadowood, another Michelin-starred restaurant, to become the Chef de Cuisine. In 2016, he was honored by the Asian Business Association as “Chef of the Year.”

Around the Kitchen Table is presented free of charge thanks to the generous support of The Vale Fox Distillery. Everyone is welcome, but you can also get a chance to ask a question live to the Chefs, get a backstage pass for an intimate meet-and-greet, and get a free one-year DISH Membership—simply by making a tax-deductible donation to support the CIA Financial Relief Scholarship. Vale Fox will be matching donations made dollar for dollar.

This promotion is only available to residents of New York State.

Your donation helps to support the education of our future culinary leaders. If you are unable to join us for these events, but would like to make a donation, you can donate directly to the CIA student scholarships now >

Our CIA alumni chefs will be using cookware from Hestan Culinary. Grab some for yourself and save 20% with a CIA friends and family discount when you use code “CIA2020” at check-out. Purchase now >