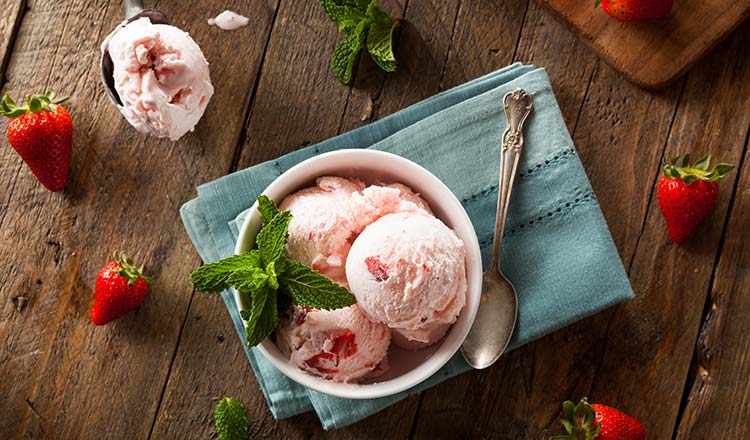 Churned frozen desserts like ice cream, sherbet, and sorbet get their soft, spoonable texture from being stirred with a paddle (known as a dasher) while they are cooled to below the freezing point in an ice-cream maker. The stirring action ensures that the ice crystals remain tiny and introduces enough air into the mixture that…
Click Here To Login

All About Ice Cream

Churned frozen desserts like ice cream, sherbet, and sorbet get their soft, spoonable texture from being stirred with a paddle (known as a dasher) while they are cooled to below the freezing point in an ice-cream maker. The stirring action ensures that the ice crystals remain tiny and introduces enough air into the mixture that it remains light enough to scoop, even when frozen.

Ingredients and Their Roles

The same basic ingredients featured in custards and creams are used to make ice cream, frozen yogurt, sherbet, sorbet, and frozen soufflés: milk (or its close relations, heavy cream, half-and-half, yogurt, and buttermilk), sugar, and, sometimes, eggs. The butterfat in milk and cream allows the incorporation of air during freezing, in much the same way that heavy cream holds small pockets of air when it is whipped. The milk solids interfere with the formation of ice crystals during freezing, contributing a smoother texture, while natural emulsifiers in milk help to bind together the liquids and fats. The type of milk or cream you use in a recipe determines the consistency of the resulting frozen dessert. Heavy cream has a higher butterfat content than milk, for the smooth and dense texture with smaller ice crystals expected in ice cream. If you choose to substitute milk for some or all of the cream in a recipe, the end result will be more like ice milk or sherbet; it will have an icier, more granular texture. Sugar and alcohol add flavor to frozen desserts, but they also lower a mixture’s freezing point: too much of either will prevent your dessert from freezing into a scoopable consistency. Eggs make frozen desserts like ice cream richer and smoother because yolks add fat and certain emulsifiers that bind ingredients. Egg white promotes a smoother, less grainy texture, as in sorbet, because of the role its proteins play in keeping the water suspended in the sorbet, so that large crystals don’t form as easily. The more moisture trapped by the proteins, especially in ice cream made with a cooked base, the fewer and smaller the ice crystals in the finished dessert.

In addition to ice cream, frozen yogurt and sorbet are churned in an ice-cream maker. Whichever type of frozen dessert you are making, it is good practice to refrigerate the base mixture for at least 4 hours and preferably overnight before freezing it. If the base is not chilled completely before you put it into an ice-cream maker, it may not freeze properly. Likewise, allowing the finished ice cream, sherbet, or sorbet to “ripen” or set in the freezer for at least 3 or 4 hours before you serve it gives the ice cream a chance to fully set. This makes the dessert easier to scoop and slower to melt. Flavor also continues to develop and mellow during ripening. You can flavor ice cream in a number of ways. Ingredients such as vanilla beans, tea, coffee, or spices are steeped in the dairy used to make a custard base, infusing it with their flavors. Ingredients such as caramel, ganache, nut pastes, or fruit purées are folded into the ice cream at the very end of the churning stage for a rippled or marbled effect. Harder add-ins, from fruits to nuts to chocolate chunks to brownie or cookie pieces, can be folded in just after you take the ice cream from the machine. Ice creams are sometimes referred to in this country as custard- or French-style and Philadelphia-style. Custard- or French-style ice creams are made by cooking cream, sugar, eggs or egg yolks, and flavorings to make a base. These ice creams have a very rich, smooth texture. Ice cream made without eggs from an uncooked base is called Philadelphia-style ice cream, named for the gastronomic capital of early America where ice cream was always exceedingly popular and produced in great quantity. Sherbets contain more sugar but less dairy than ice creams. Like Philadephia-style ice creams, they contain no egg yolks, but egg whites may be used. Sherbets may be made using a variety of dairy products, such as whole or reduced-fat milk. Even a cultured milk product like buttermilk can be used to make a smooth and refreshing sherbet. Sorbet is made from a concentrated sugar syrup with added flavorings; it never contains dairy. About twice as much sugar is used in sorbet as in ice cream; the additional sugar is necessary to keep these very low-fat or fat-free desserts from freezing into solid cubes. A small amount of egg white may also be added to the sorbet base to give the final product a smoother texture. Flavorings for sorbets range from fresh fruit purées to fruit juices to infusions of tea, sweet basil, or mint. A granita, known in French as a granité, is an Italian ice. Like sorbet, it is a light and refreshing frozen dessert made of sugar, water, and an intensely flavored liquid or purée. A granita does not contain as much sugar as sorbet. This, plus the fact that granitas are not churned constantly as they freeze, results in an icier texture. Stirring the mixture only occasionally, or only at the end of freezing, encourages the formation of large ice crystals. Savory granitas are often served as an intermezzo (between courses), while sweet granitas are served as a dessert, either on their own or paired with richer elements.