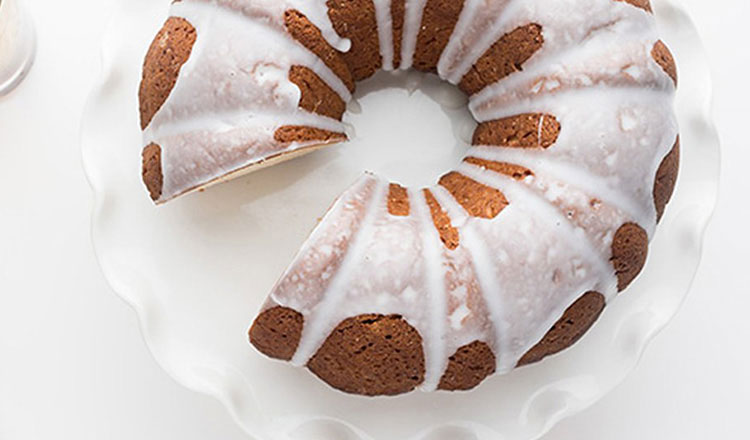 Though it is the most wonderful time of the year, some Christmas traditions are less than perfect. While faithful devotees will tout the virtues of fruit cake and eggnog, unofficial and non-scientific research shows that many people think they are, well, the pits.

Fruit cake and eggnog are related in their notoriety as foods that still have some kinks to work out. In truth, the problem often lies with the execution. And, in the case of eggnog, some of the problem actually lies in the fact that you are pouring a glass of eggy cream into your mouth before dinner.

This Christmas season, we thought…What if we took the best parts of each of these challenged recipes and gave them a modern twist? Would boozy fruit cake be better suited as a lightly spiced cocktail? Could we take the richness that basically defines eggnog and create a nutmeg-forward cake that everyone would actually enjoy?

Fruit cake is a very dense spice cake that is loaded with dried fruits and soaked in liquor, like rum, brandy, or whisky. Over the years, it has evolved into a caricature of itself, available in shelf-stable varieties in gas stations and drug stores, studded with the most unnaturally colored neon green cherries. Commercialization has ruined fruit cake, which when prepared well, can actually be a lovely, moist cake filled with contrasting flavors and textures.

But as a cocktail, there is less risk, and in our version, we’ve taken just a few of those flavors to make a refreshing and very drinkable mix that’s perfect with pre-dinner snacks. Hard, fermented cider is easy to come by these days, and a nice dry version will help keep this from getting too sweet. Mixed with spicy ginger beer and a few dashes of bitters (we chose cherry as an homage to the real deal), you could stop there. But it’s not fruit cake without gilding the lily, so we added bourbon.

When you make eggnog, you’re almost halfway to making a cake anyway, so it was a natural progression. A cooked mixture of eggs, milk, cream, and spices, eggnog is basically melted ice cream. To transform it into a crowd-pleasing cake, we looked to another decadent recipe: the pound cake! This one has sour cream that adds creaminess and a little tangy, which helps cut the sweetness that can be a turn off in eggnog. A thin glaze is one of the best parts of any bundt cake, so we spiked ours with a little bit of rum. But you can opt for a virgin variety and use milk in your glaze instead.

As lovers of food and drink, we encourage you to try these variations, but also to keep your heart open to the original recipes that have a special place in the Christmas tradition. We recommend customizing and modernizing old family recipes to suit your tastes, so that they don’t get lost forever.